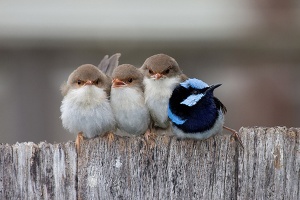 I’m convinced that modesty is useless conditioning. It is simply a way that empathy is used against humanity. I see no logical reason to not be great and recognize where you are such. I have beat myself to a pulp in attempts to make others comfortable, to present no threat to their personal security. It took much soul searching and grappling my own insecurities to see that this is not part of my purpose. No one’s insecurities/psychological inadequacies are mine to deal with just as mine or anyone else’s are not yours. It is completely irresponsible and self destructive to make one’s self responsible for another’s emotions. This is because only the subject can control or even really understand their emotion. They are in the end the only one who knows how to produce pleasurable feelings in themselves.

The reality regarding insecurity is we all have them even those who you may look up to in some way. The biggest mega stars or supermodels have insecurities because it is the human condition, we all endure struggle. The test is in how we deal with them, how we beat them into submission as this is indeed what is required. In most cases this is the only way to manifest the things we perceive as rewards into our experience. Insecurities allow opportunities for others to manipulate and control us through our emotions. Everyone wants to be happy and comfortable, unchecked most concern themselves primarily with this. Because they are only living their experience they will expect those outside them to attend to their happiness and comfort as well. In some respect humans gauge love by how much another is willing to do this. This conditioning becomes problematic for those who are empathetically talented because this will be taken advantage of. Producing situations where only one set of desires are expected to be considered, the empathetically talented party becomes responsible for coalescing to the other without concern for their own desires.

I believe that usually neither party realizes this is happening when it is, only after being removed from said situation and then only sometimes. The interesting thing for me is how many people I have come across who are veritable vampires, living on manipulation. Most of them don’t even know it, at least not on their most conscious level of thought. They seem to think they are being “good people” whatever that means. That they care for the other party and because they do the party should be responsible for their emotions. The reality is in most cases these people care for what the other can do for them. They care for the feeling of authoritative importance they derive from the subtle oppression they can inflict, how much they can manipulate another’s behavior. They don’t actually care for the person because manipulation wouldn’t be required, the person’s natural presence would make them happy.

Modesty is a detriment because the only way to defend oneself against this kind of attack is to be aware of one’s power, of the things that make you unique and special. This is because the common bases of interpersonal assaults on liberty is forcing you to minimize yourself by making you guilty for not being the way another wants you to. A way they want you to be so that they can be comfortable. So that you don’t highlight for them where they are inadequate to themselves. A red flag tendency to look for is that of underlining your differences from the crowd even if they share them. Some creatures get off on caging things and being in control of their movements. It is deeply imbedded in their psyche that this is where their worth comes from. The easiest way to cage humans is by compartmentalizing and categorizing them because then everything says they should conform to the stereotypes of their category.

I obliterate norms and expectations in the most delicate graceful way but with the efficiency of an assassin. I will never tolerate anyones warped ideas of what I should be. I will not proliferate the gospel of modesty because it is counter productive and teaches people to be or pretend to be insecure for other people’s comfort. If you feel sexy own it. If you feel smart act it. I will not silently watch people minimize their talents and abilities to pacify. We should relish and cultivate pride in what we are, in my opinion it is wrong not to. You were given whatever gifts are yours for a reason and that reason is not to minimze them, in fact I believe we are meant to maximize and utilize all talents. We all have our unique contributions to make and how dare anyone make another feel bad about that. Here is something to think about, bragging and expecting modesty both come from insecurity. Never minimize yourself for anyone’s comfort because to do this is to turn away from your purpose for existence.